Below is a guest post from Louise Coughlan, daughter of the late John Coughlan, founder and editor of New Spotlight magazine. Louise attended the New Spotlight Live show in March this year.

The Irish Showbands performed in Vicar Street recently with top class acts such as Dickie Rock, Tony Kenny, Karen Black from the Nevada Showband and many more. Harry Crosbie opened this intimate venue in 1998 and since then it has been a major successful place for stand-up comedians, concerts and drama performances. Through the years Bob Dylan, Neil Young and Paul Simon have performed in Vicar Street. While the bands took us back in time, a full screen displayed Spotlight magazine and other showbands of the 60’s and 70’s.

Dickie Rock’s biggest success in the Irish charts was in the 1960’s with the Miami Showband. Dickie was the frontman for this band, but however tragedy struck in 1975 when three members were killed in Northern Ireland during the troubles. With thirteen top ten hits including 7 number ones, Dickie Rock and the Miami were the first Irish artists to go straight into the number one spot with “Every Step of the Way” in 1965. During this time, Rock attracted the sort of attention that the Beatles would have got. When Dickie came on stage, crowds, especially the women, wolf whistled and screamed in excitement.

Tony Kenny was adored by fans and at the Spotlight night he put on a really good show. When starting out Tony decided to join the Mexican Showband only for a short time, and then played with the Arran Showband, but decided to form his own band called the Vampires,considered to be so popular and even in the same league as the Beach Boys. In September 1972 Tony started a solo career and in Spotlight magazine in 1973,it was announced that Tony would be taking the role as Jesus in “Jesus Christ Superstar.” For a long time he wanted to break into the English scene and he finally did with his hit Heart of Stone. Tony was voted Personality of the Year in 1975 by Spotlight magazine for making the transition from showband to stage performer. 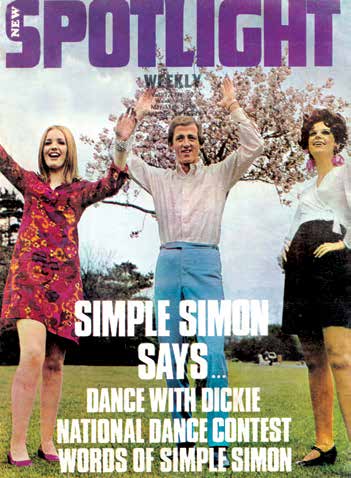 Spotlight magazine, Editor John Coughlan published it on a weekly basis and it promoted showbands as well as rock bands of the 60’s. Spotlight which then became New Spotlight was advertised as Ireland’s No. 1 weekly entertainment magazine. Regular contributors were Shay Healy, Sam Smyth, Donal Corvin as well as Pat Egan. Brenda Lee appeared on the 1st issue and Tony Kenny appeared many times on the front page. With sales of the magazine exceeding 45,000, it’s no wonder it was Ireland’s number one weekly entertainment magazine.

Tony Kenny, Dickie Rock and the Nevada Showband put on a great performance in a pretty spectacular venue, it was a great night.