Some 2 years before the airing of the first Father Ted episode, we have Scrap Saturday, Newshounds, RTE, Father Trendy all covered in this Dermot Morgan interview by Damian Corless from In Dublin, March, 1993.  Jonathan Parson took the photos. Brand New Retro has scanned and included all the pages from the interview below. (click on the text pages to enlarge)

During the 1990s, my friend Jake Walsh was running gigs in the North East. Remembering that he put on quite a few shows with Dermot I asked if he could do a piece for Brand New Retro on any any of his memories of working with Dermot. You can read Jake’s article at bottom of this page. 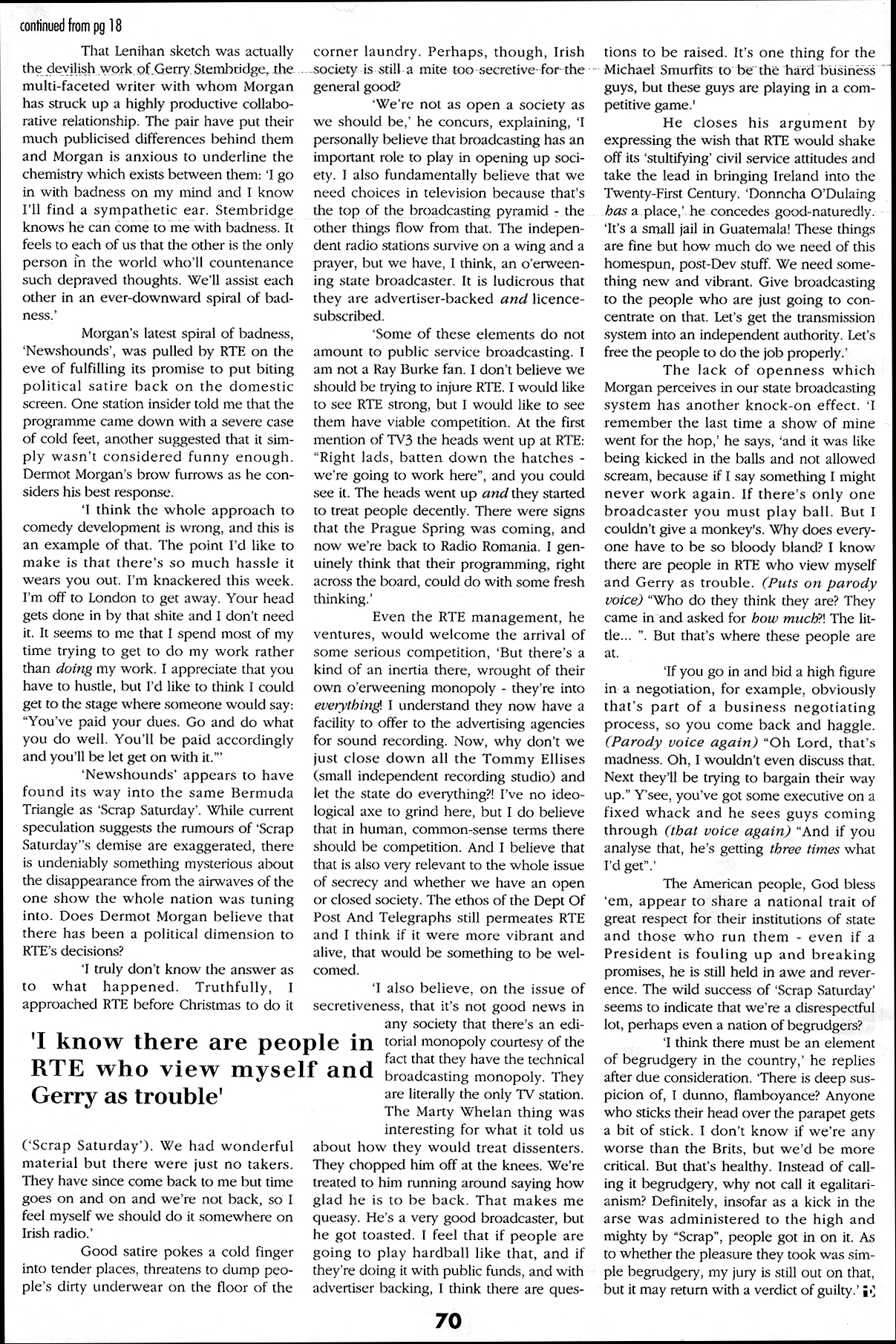 Congrats to all at BNR for bringing up the third anniversary, and also thanks to DubDoug for asking me to submit a ‘guest post’ on the late Dermot Morgan…

My connections with Dermot Morgan go back to the mid-90s when I promoted a lot of music and also some comedy and satire around the north-east, mostly in Dundalk but also sometimes in Drogheda and other towns, as well.

My first show with Dermot was in the Town Hall in Dundalk, in December 1993, if my memory is in good working order. This was one of the most successful shows I had the pleasure of presenting as Morgan’s brand of wit, satire and impersonation was well ventilated at the time on various RTE TV and radio shows, and so he was a popular choice for firms booking a pre-Christmas night out for their staff, and also as presents for good customers and personal gifts.

Back then, there were 672 seats in the venerable (and drafty!) old Town Hall and we came close to selling every last one of them! Particularly satisfying was the great reaction at the front door afterwards, where I always position myself, if possible, to take the temperature of the show just ended. Through an intermediary, I had been asked to request of Dermot to come and ‘meet and greet’ with a number of hard-core fans who had followed him for years and also ran buses to various Dublin performances, and he was delighted to oblige, downing a couple of pints in the Condil Bar next door while posing for photos and signing autographs.

But the next show in May 1995 was quite a contrast to the first show we put on. At this stage, Morgan had been based in the UK for a lot of 1994 making the first series of Father Ted and therefore largely absent from Irish TV and radio. Although the first 2 or 3 shows of Father Ted had been aired, it was still just bedding down and not the cult attraction that it was to later become.

A combination of this new direction, the time of year, late arrival of the posters and promotional material and Dermot’s absence from the national political discourse for a while combined to make this a much harder sell. Whereas the first show had been almost a lock-out, this one was roughly half-full and I remember observing the thin queue outside at 7.30pm on a very sunny May evening, before the opening of the doors, with a slightly wistful feeling.

To compound the tepid feel of the event, Dermot had always had a slightly nervous habit or ‘performance tic’ of glancing at his watch during shows, and this was (a little unfairly) remarked upon afterwards as evidence that he wasn’t really motivated to deliver his trademark strong performance.

The final insult for some of the true-blue ‘Morganistas’ was that he didn’t linger afterwards, as per his first show. In actual fact, his transport troubles had been well documented at that stage after some speeding and drinking offences, and he had either lost his license or just decided he didn’t want the ‘hassle’ of driving himself to his shows any more, so a new style was in evidence where he left immediately afterwards for Dublin and the sanctuary of his local as he always a enjoyed a few pints after a show.

My final involvement with Dermot was in the Rossnaree Hotel near Drogheda, sometime in 1996 or 1997, I think. This one was a return to the enthusiastic response of the first Dundalk show as the tickets were relatively easier to move, Father Ted had established itself and a new-ish audience was willing to enjoy Morgan for himself instead of just seeking a conduit to satirise Irish life and politics. The show reflected this being a mixture of straightforward stand-up and Father Ted-isms, but old favourites like Eamon Dunphy, PJ Mara and CJ Haughey were at hand to lend some jagged humour to the proceedings!

My recollection of this show is being up in the dressing room beforehand (for once he was on time!) and offering to organise some refreshments for some of his own guests (like ex-attorney general John Rogers) who attended and also asking Dermot each time if was also OK. After this had happened a few times as new associates arrived, he turned round to me and asked if I was attempting to out-Doyle Mrs Doyle!:)

Obviously, it was quite a shock to hear of his demise the following year and it was particularly tragic that he was removed from us just as his lifetime aspiration of breaking through to a large enough audience to lessen his dependency on making a living by constant ‘live work’ on the performance version of the ‘chicken and chips’ circuit of provincial Ireland that he found detrimental to developing national projects like Scrap Saturday, the ‘Jobs for the Boys’ live satirical revue and his neutered ‘Newshounds’ TV show, had been achieved. Of the latter, I see it referenced in the article that DubDoug has sourced to go with this memoir. There are 2 sides to this affair, as Dermot was very annoyed by RTE’s rejection of the show after running just one pilot episode. Coming after the (inexplicable) ‘axing’ of the stupendously popular ‘Scrap Saturday’ radio show, this was like a dagger to the heart of Morgan as he felt it deprived him of the financial security that he had worked so long and hard towards. However, other neutrals were of the opinion that this project wasn’t up to the quality of his previous media forays. Little did he realise then that salvation (in the form of Father Ted) was just around the corner – if only for a brief while, of course…

The one question that people invariably ask me when they hear of some ‘celebrity’ that I have worked with is inevitable, I suppose: ‘What was he (really) like?’ But in my capacity as a provincial promoter, one usually only gets a brief snap-shot of the person. What I would say is that in the build-up to the shows, he was the complete professional being available for whatever promotional work had to be done, usually interviews with the local press or radio.

Any time I called him, he would be working away at his typewriter or computer, pushing ahead with any creative project he was trying to advance and not afraid to ask for an opinion or two about the subject at hand. On the evening of the show, he was always late (!) and I think we had to hold the doors of each show we did, to accommodate a very quick soundcheck. Pre-show he was rather pre-occupied and maybe a little curt but that’s understandable as everyone that comes expects the perfect show and it’s a big load to carry, in performance terms. After the show, he liked to relax and meet the faithful, but as I alluded to above, that part of the pleasure was removed from him by a district court justice or two, and the winding-down, post-show pint or two had been replaced by a mad dash to get back to his local environs in Dublin.

A final anecdote: in the run-up to that first show and with a big night beckoning, I decided to treat myself to the same ‘Jobs for the Boys’ show in the Tivoli Theatre during its sell-out run as I knew I wouldn’t see much, if indeed any, of my own show with him and invited BNR supremo DubDoug along as a guest. During the ‘Eamon Dunphy’ segment, he projected ‘Eamo’ as a ‘lock-hard’ (ie, self-appointed carpark attendant) outside ED’s beloved Shelbourne Hotel and perused the audience looking for customers (ie, victims!). As he approached our row, I remember doing a quick think that if he picked on me as a participant, I’d have to remind him that I was the guy that was presenting his Dundalk show the following week and to desist if he wanted to get paid. Fortunately, he did an about-turn at the last moment and the danger passed!

To conclude, it’s fascinating the way his star turn as Father Ted has endured after a relatively inauspicious start. Last year I was in a bar in Hampstead in London, relaxing after a long day around the city when I overheard the guys at the next table debating FT in great detail. When I couldn’t suppress a chuckle, we conversed and having established that I’m Irish, they passed on their compliments about the show and asked my opinion. When I informed them that I had actually worked with Morgan, a space at the table was instantly cleared for me and copious alcohol supplied! I’m sure some of that liquor is still resting somewhere in my bloodstream account – cheers Dermot, wherever you are!

Cork’s a Popping – 1968 Cork Fashion Shoot with the Dixies